Biocat present at top fairs in the sector

As part of its internationalization strategy in the healthcare and life sciences sector, Biocat coordinated the Catalan delegation to the main fairs in the sector in 2016 in order to boost the projection of the BioRegion’s ecosystem and strengthen commercial ties.

During the symbolic ceremony at the closing of BIO-Europe Spring 2016 in Stockholm on 6 April 2016, Barcelona was officially announced as the host city for the 2017 edition.

The top partnering congress in the biotechnology sector and pharmaceutical industry will be held in Barcelona for the third time, after the resounding success in 2010 and 2013. In fact, in 2013 there were more than 2,000 delegates from 1,219 companies and organizations, 58 of which were Catalan. The fair had an estimated economic impact on the city of €2.2 millions.

In her speech, EBD Group Managing Director Anna Chrisman said, “We’re very happy to announce that BIO-Europe Spring 2017 will take place in Barcelona, the headquarters of the strong BioRegion of Catalonia. It will be the eleventh edition and the third time Barcelona has hosted the event. We will present more than 2,500 dealmakers from the pharmaceutical industry, biotechnology and finance sectors focused on the one-to-one partnering opportunities that drive the drug-development industry.”

Biospain 2016, the largest biotechnology and pharmaceutical event organized by a Spanish association and one of the largest in Europe in number of one-to-one meetings, was held in Bilbao from 28 to 30 September 2016 with 220 exhibitors, 700 organizations and more than 1,500 delegates from 28 countries around the world. In fact, 33% of all participants were from countries like the United States, Israel, Japan and Brazil.

In the exhibitors space, the BioRegion of Catalonia had its own pavilion, coordinated by Biocat, with Iproteos, Mind the Byte, Ability Pharma, Enantia and Specipig. This was the first time Catalan companies had had their own booth.

On the program of conferences, Biocat CEO Albert Barberà participated in a session called “Massachusetts and Spain health ecosystems learning from each other”, debating best practices to optimize local resources (talent, capital, technology and networks) and proposing strategies to accelerate growth and strengthen the innovation bridge between Massachusetts and Spain. The panel featured representatives from organizations that promote health in Massachusetts (Robert Ramos, marketing coordinator for the Massachusetts Life Sciences Center), Spain (Ion Arocena, director general of ASEBIO) and the Basque Country (Amaia Martínez, head of Strategic Initiatives for SPRI-Basque Business Development Agency), moderated by CEO of the Richi Foundation from the United States, Ernest Lara. 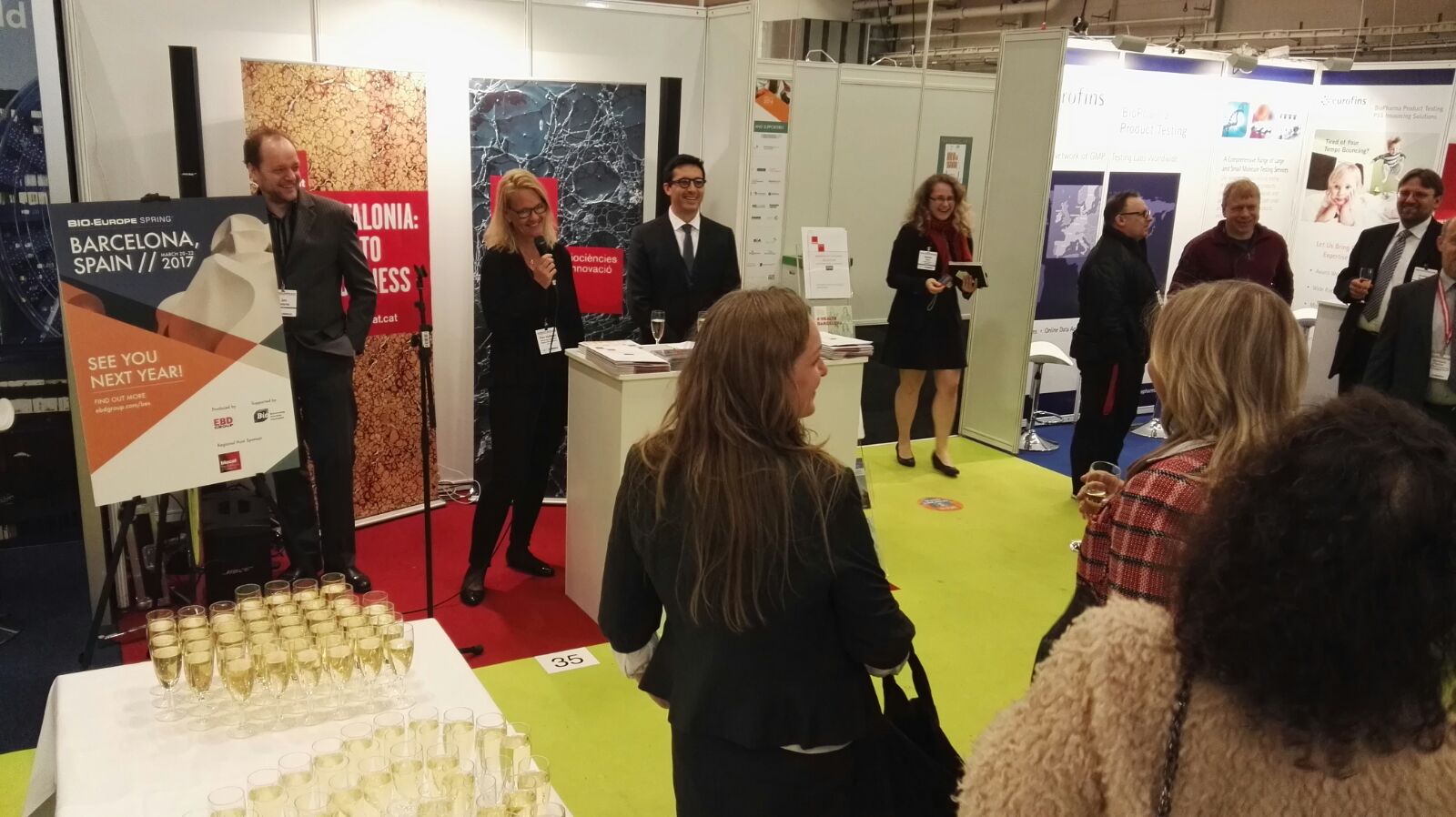 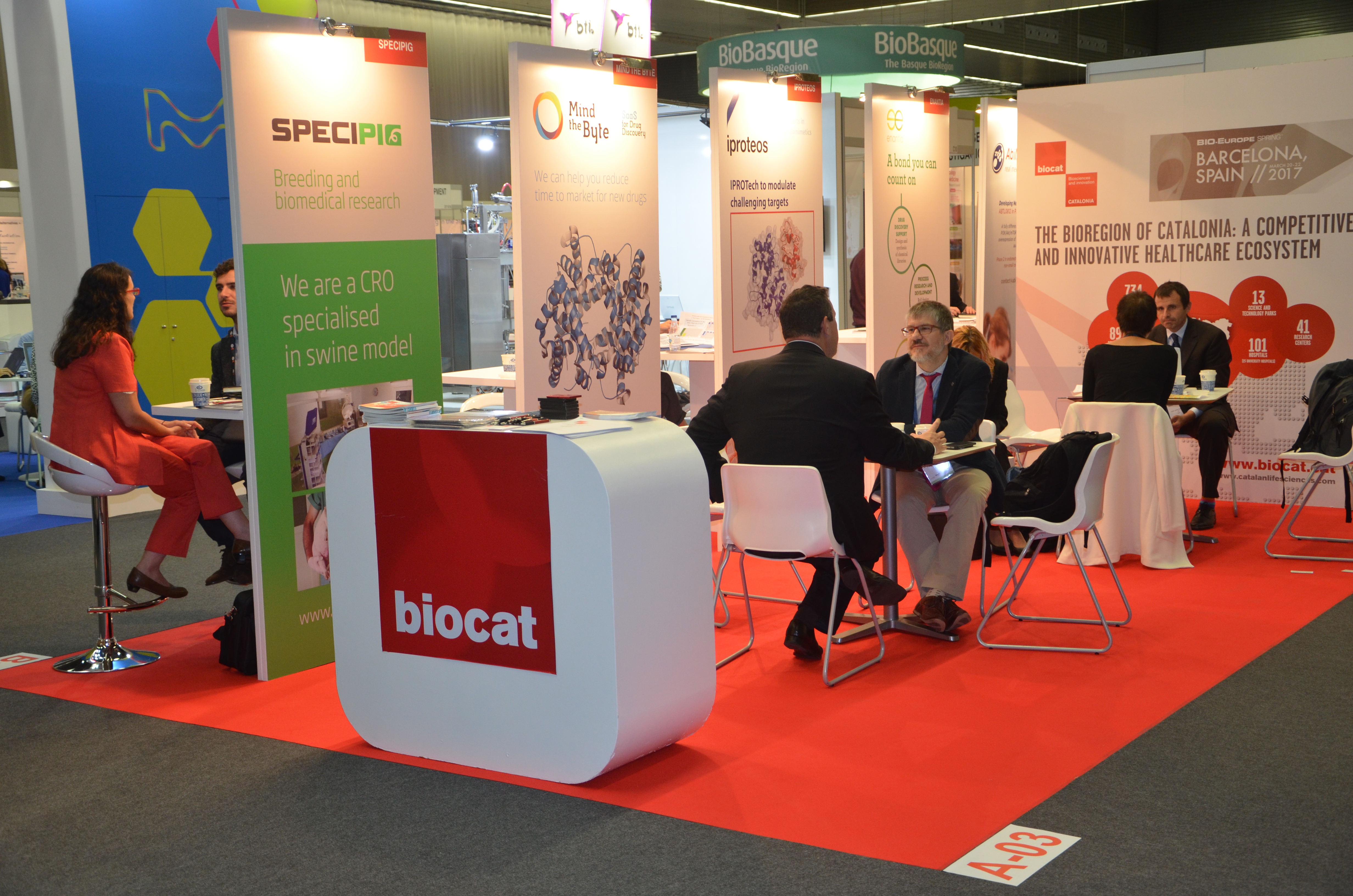 BioRegion booth, location of many meetings at BIO Spain.

From 4 to 6 October 2016, Barcelona hosted CPhI, the leading European pharmaceutical fair in the world. This event brought together more than 36,000 professionals from the pharmaceutical industry from 150 different countries.

Under the framework of this noteworthy event, Biocat raised awareness of the BioRegion with a conference introducing the Catalan healthcare and life sciences sector, one of the most dynamic in Europe. Additionally, this event also shared the goals and opportunities this ecosystem is facing over the coming years and the competitive advantages of regional assets and initiatives.

Biospain also hosted the 3rd Career Fair, where the health-acceleration program Design Health Barcelona (d·Health Barcelona) had its own booth and attracted more than 300 visitors. The master is one of only four pioneering programs in Europe to train students according to the biodesign method and has helped create 9 business projects in the innovative medical technology arena.