2015 Biocat Report: benchmark analysis of the healthcare and life sciences sector in Catalonia

The fourth edition of the Biocat Report was published this year, once again offering key data on the stakeholders in the BioRegion of Catalonia in order to provide a holistic vision of the Catalan healthcare and life sciences sector and help boost its international positioning.

The report analyzes its strengths and strategic aspects of its evolution, provides updated information on companies’ funding and projects, features articles by international experts and graphs illustrating the main figures.

Presentation of the report

On 19 May 2016, the 2015 Biocat Report was presented at an official event presided over by President of Catalonia Carles Puigdemont, bringing together more than 200 politicians, business people and noteworthy figures at the Palau de la Generalitat.

Biocat CEO Albert Barberà presented the main figures and data from the report, which gives a general overview of the whole healthcare and life sciences sector in Catalonia, as well as more detailed information on its subsectors (biotechnology, pharmaceuticals, medical technology and digital health) and research organizations, with an exhaustive analysis of economic data and scientific production from 2013 to 2015.

At the event, Ella Korets-Smith, executive director of the Toronto life-sciences cluster TO Health!, explained some of the factors that have made the Canadian model successful and shared best practices that could be useful if applied to the ecosystem of the BioRegion of Catalonia. According to Korets-Smith, a successful cluster needs the right context, interesting activities and good resources and skills. “Activities aligned with needs, resources and business-friendly conditions are key to the success of cluster initiatives.” The Canadian expert also highlighted the importance of all of the institutions involved being aligned in order to reach goals more quickly. In conclusion, Korets-Smith reminded those in attendance that there is still room for strong clusters like Biocat.

The BioRegion of Catalonia - Biocat Report 2015 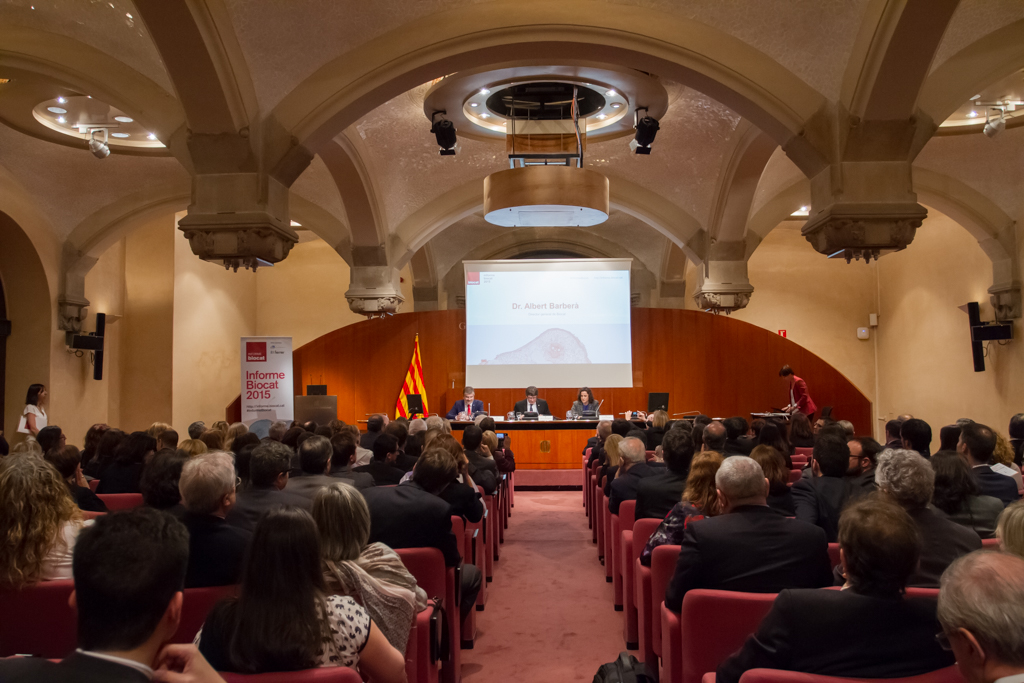 Presentation of the Biocat Report to more than 200 professionals from the business, academic and science arenas. 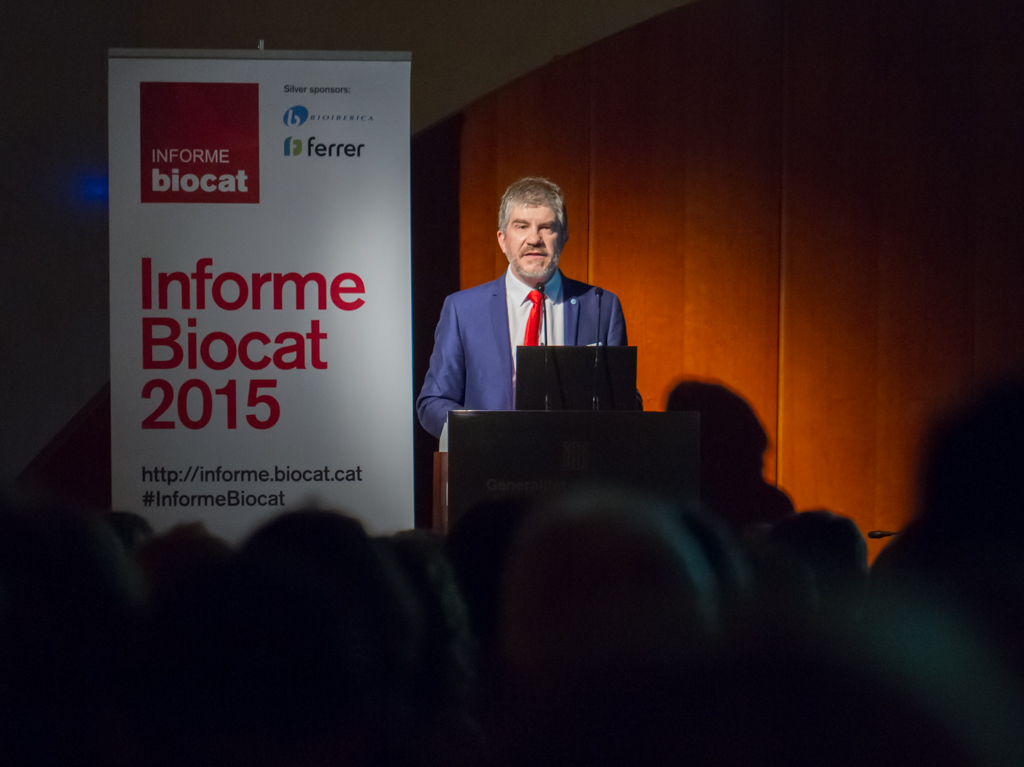 Albert Barberà, Biocat CEO, presenting the main figures and data from the report.

Despite the positive results for most of the indicators, the Biocat Report also shows that there are still challenges to be tackled. First of all, top-notch research doesn't translate into high socioeconomic value.

"There is still a gap between the market and research, and between our indicators regarding scientific excellence and those for innovation: the BioRegion doesn't have a science problem, it has a transfer problem,” warns Albert Barberà. For example, between 2010 and 2015 only 286 patent applications in the healthcare and life sciences sector were submitted from Catalonia to the OEPM (Spanish Patent and Trademark Office), 17% of the national total

Furthermore, public and private investment in R&D in Catalonia dropped nearly 11% between 2009 (the turning point after a decade of steady increase) and 2014. R&D spending makes up 1.47% of the Catalan GDP (data from 2014), above the Spanish average (1.23%). Catalonia leads R&D investment in biotechnology in Spain, with total spending of €416 millions (28.7% of the total – data from 2014). “We must increase support for basic and clinical research, and get the business sector involved,” says Biocat CEO. “Between 2002 and 2013, public investment as a percentage of the GDP was 1.7 times greater, while private investment remained unchanged. This trend must be reversed."

Finally, despite the successful investment seen in 2015, access to capital continues to be one of the main hurdles facing Catalan companies. “We need funding vehicles to develop proof of concept, to expand the pool of investors, to attract more private foreign capital, and the legal mechanisms to incentivize a culture of philanthropy, among others,” said Albert Barberà. “We must continue working to address these challenges, focusing on technology and knowledge transfer, as well as support for entrepreneurs and business growth, because we not only have to help people get started, but also help companies scale up.” 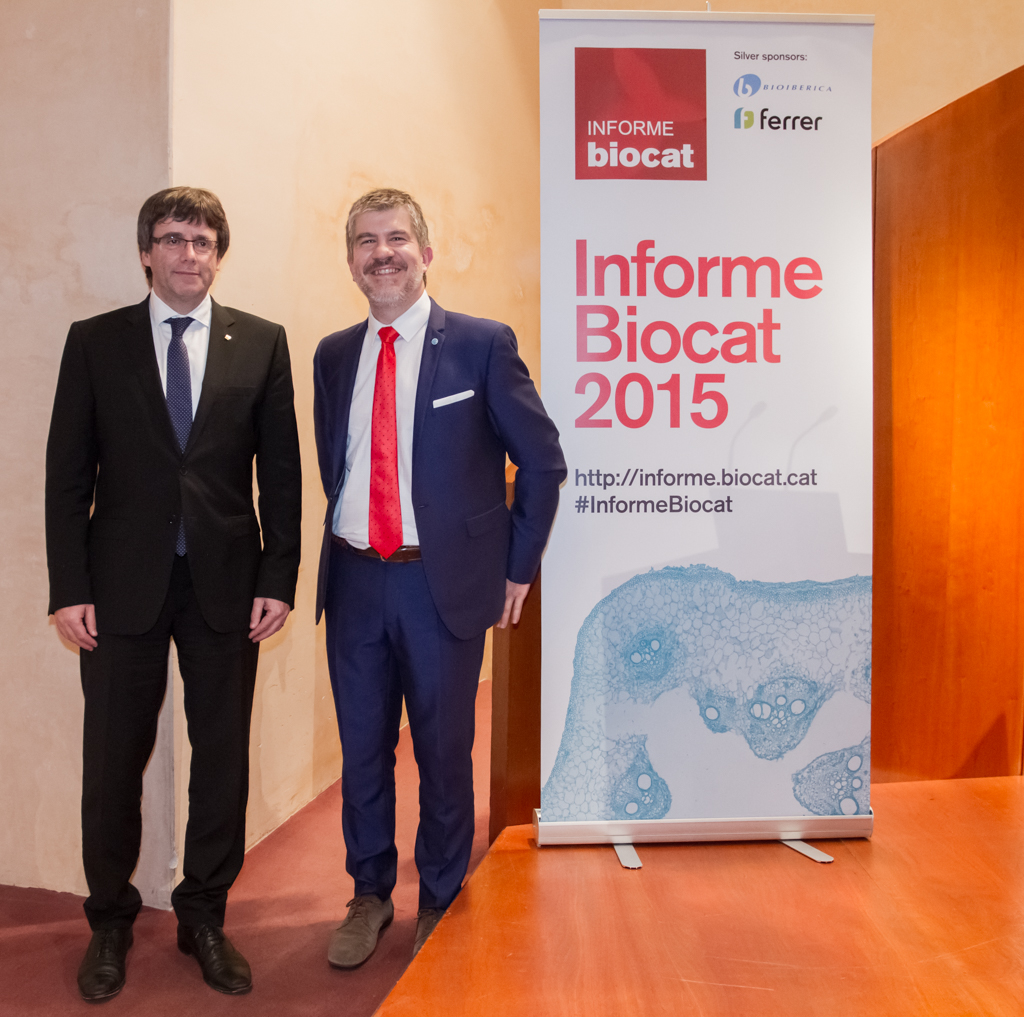 President of the Government of Catalonia Carles Puigdemont with Albert Barberà.