Biocat works very actively every day to provide both professionals and the general public access to relevant, up-to-date information on the healthcare and life sciences sector, with particular attention to scientific research, innovation and entrepreneurship initiatives in the BioRegion.

Biocat’s active presence in the media, online and on social media helps raise awareness of the work done through the BioRegion in terms of economic and social development of the national and international science and business community, with a growing audience in all channels.

In 2016, Biocat’s website, available in Catalan, Spanish and English, saw a total of 176,877 visits from 103,104 unique users. These figures confirm the site’s role as the benchmark showcase for the sector. In total, nearly 136 news articles, 21 interviews and 11 reports on current events in the sector were published on the site, as well as more than 250 events on the agenda and 268 electronic notifications regarding activities of interest (30% more than in 2015) sent to a group of nearly 11,000 people (the number of people who receive the newsletter has doubled since 2010 but is up only 7% from 2015), including 11 issues of the monthly E-News (trilingual).

The new B·Debate website, which was launched in September 2016 and is more focused on scientific debate and dissemination, received over 26,600 visits, 5% more than in 2015. The website of the Moebio training initiative was also improved and it now has information on the projects and companies that have come out of the d·HEALTH Barcelona master and saw more visits than in 2015 (over 12,000).

The plan to boost presence on social media increased the number of people following Biocat on Twitter, Facebook and LinkedIn by more than 20% compared to 2015. Biocat’s Twitter accounts in Catalan, Spanish and English had a joint total of more than 12,300 followers by the end of 2016, or more than 14,400 if we add those following the Moebio and B·Debate profiles. Additionally, at the end of 2016, more than 4,400 were following Biocat on LinkedIn, the most popular professional network in the world.

In terms of media coverage, Biocat’s activities in 2016 generated more than 124 articles in traditional media, 429 in digital media outlets (9 abroad) and 5 radio or TV appearances. Biocat is working to boost its international media presence and last year reached countries like the United States, United Kingdom and Korea, among others.

In November 2016, Nature devoted its largest supplement ever on a bioregion to Catalonia. The journal Nature, a global multidisciplinary leader in the scientific arena, included a special supplement on Catalonia and its companies and research centers with its 24 November issue. Entitled “Spotlight on Catalonia”, the prestigious publication devoted a total of 20 pages to the BioRegion. Biocat collaborated with Nature to spread the word about the opportunity to participate in this initiative and help position and boost the visibility of stakeholders in the BioRegion of Catalonia on an international level.

Additionally, the 2015 Biocat Report was published in May 2016, presented for the first time ever on an interactive website: informe.biocat.cat. This online platform also includes an infographic with a general overview of the healthcare and life sciences ecosystem in the BioRegion of Catalonia and sums up the main trends in the sector.

The Biocat job site has also proven to be highly useful to professionals, as seen in the more than 100,000 visits this site received in 2016. More than 557 specific job offers in the sector were published last year, 40% more than in 2015.

In 2016, an exclusive new international portal of the Directory of the BioRegion of Catalonia was launched. This portal gives users access to the companies and organizations working in healthcare and the life sciences in Catalonia.

Each entry in the directory includes a description of the company or organization with different categories depending on the sector it belongs to (biotech, pharma, medtech, digital health, etc.), its subsector, information on its pipeline and its funding.

The database compiles information on more than 1,000 companies and organizations and is updated daily.It is the result of an agreement between Biocat and Venture Valuation, which owns the Biotechgate international database.

The BioRegion Directory was expanded in 2016 as a result of constantly updating the information and keeping an eye on the sector. With more than 873 company entries, this directory has consolidated its place as the international reference for information on the healthcare and life sciences sector in Catalonia. 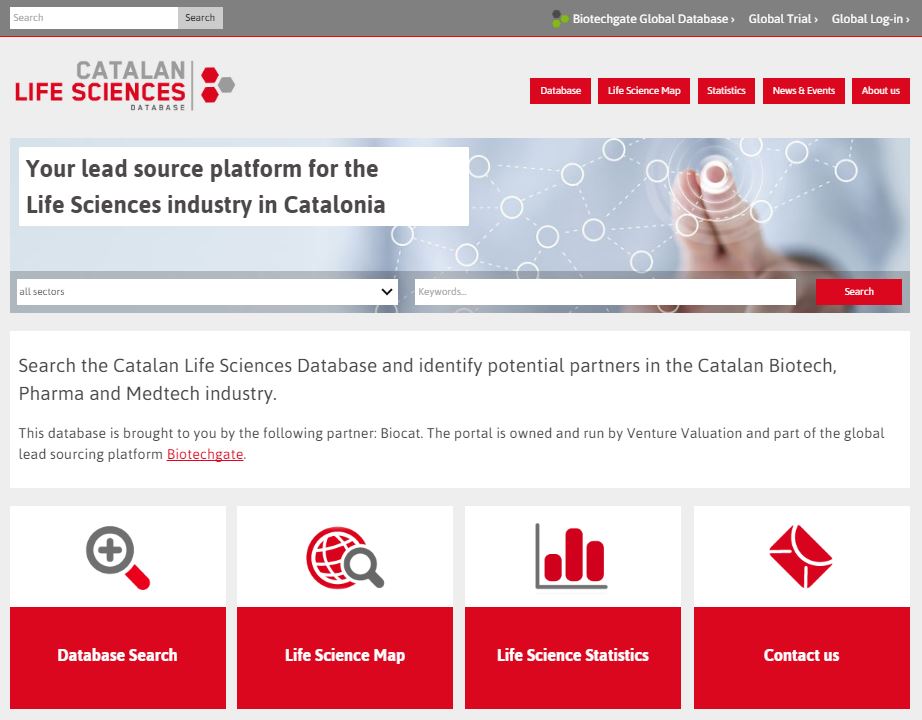